Where did we start…?

This review began its story some time ago when it was supposed to be a look at the extremely dramatic and phenomenal “Avengers: Infinity War” after which it slowly turned into an opinion about the spectacular and probably even better than its predecessor “Deadpool 2” after which a lot of things changed and I never got to the point where I had written anything about either of the movies mentioned so far. Well, after a long period of silence (actually, exactly 3 months to be precise), I think I finally found the time and the desire to write something, even fairly short, for another Marvel adventure, this time coming in miniature dimensions but definitely not with miniature quality – “Ant-Man and the Wasp”.

For or against sequels?

Often the tendency which movie sequels follow, or the so-called “more of the same” way, is not exactly the thing the audience wants to see due to numerous reasons. With the years of experience, however, it seems that Marvel have taken into account some things and after the great follow-ups we got for “Captain America” and “Thor”, for example, which follow a whole new formula compared to their predecessors, here we have a movie that has a huge number of similarities with the previous one and still the already mentioned in the beginning formula works wonders. Like “Ant-Man”, “Ant-Man and the Wasp” gets its release at a time when the devastating “Infinity War” has been unleashed and another even more dramatic second part is expected to arrive, and tells the story of characters who although in one way or another have already influenced other superheroes (sometimes even with great impact – like in “Civil War”), still are somehow left behind and in the shadows as less known to the audience.

And even after everything said in the paragraph above, “Ant-Man and the Wasp” still manages to do exactly what is expected from it – not only do a follow-up on the events that have started in the first part, but also further develop them in such a way that it creates its own identity and uniqueness of the heroes and even as a part of the huge Marvel universe, manages to seclude them in an own separate world which even the people not familiar with the comic world can thoroughly enjoy. Peyton Reed succeeds for the second time in his endeavour as this time we have an adventure with literally bigger dimensions, the same cool, as well as some new colourful characters (which is a big bonus compared to the boring villain which the first film offered), more than enough sense of humor without being more cynical or twisted than needed in order to be liked better, as well as pretty, pretty nice action sequences. 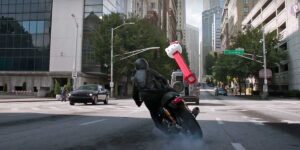 Such mixups between cool chases and flying objects with unreal proportions will literally feel like child’s play to you.

Actors, plots and tons of jokes…

So where should I begin? If I followed my typical style of structuring the text, I would probably say what a great job Reed and his team have done. This may not be the main reason the film is what it is though. Actually the thing I liked the most was the cool approach which the screen writers have chosen to present an otherwise pretty cliché plotline, as well as the willingness with which the actors perform and breathe life into their characters. We see Michael Douglas, Michelle Pfeiffer and Laurence Fishburne, as if they have returned to their 20-years-younger selves, prove that the good ol’ generation of actors is still in the game and can be a worthy competition of the young talents (well, here we clearly see the technologies in play which have done an amazing job in the “rejuvenation” of the actors in particular scenes but still, the acting quality is obvious). We also see a Walter Goggins playing a role which suits him perfectly and it is not the first time in which he manages to impress me with the fact how easy it is for him to get under the skin of his character.

Not to mention Paul Rudd and Evangeline Lilly whom I’m a fan of since some previous appearances of theirs in totally different movies, who again manage to perfectly embody in their characters and whose mutual collaborative work on screen is even better than last time and every dialog line they share with each other is a mini reason for celebration. Let’s also not forget the very promising Hannah John-Kamen and Abby Ryder Fortson from who we’ll probably see more and more on the big screen, as well as the great Michael Peña who, together with Tip Harris and David Dastmalchian, steals some of the funniest moments in the movie. 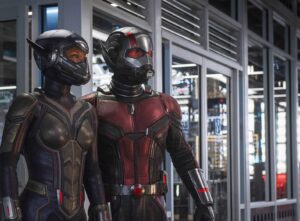 The synchronization that these two manage to achieve between each other, even when not wearing their awesome suits, deserves only admiration.

With the development of the plot what we can also find interesting is that there are no true villains. Yes, there are some characters who could be defined as “bad” to some extent but they are all led by their own motives and follow personal goals which by unfortunate circumstances are intertwined with these of the “good” guys. In the end there are (almost) no casualties and even though the movie is pretty straightforward, it gives us one of the most optimistic endings that I’ve seen for some time now (excluding the first bonus scene – there we can see the absolute opposite of what I just said but the reason why is pretty obvious – just see it for yourselves, you won’t regret it). Until we reach that point though, there are numerous ridiculous (like the one in the school – possibly the thing at which I laughed the most, as well as Michael Peña’s imitation which was a re-run of one of the most memorable moments in the first movie) and filled with adrenaline (the chase towards the end of the movie) scenes.

The references to other movies are also unavoidable and at a couple of places we can see some very thinly included but also cool concepts which will definitely appeal to the hardcore fans (the one with Fishburne, for example – hint: it’s not for a Marvel movie). We are left with good impressions from some moments implied in the first movie as well, which find their visualization here – for example Hope’s fighting skills or Scott’s visions. Apart from that, as I already mentioned, the sense of humor is extremely well placed throughout the plot without being too intrusive and gives a very light tone to the whole movie (for example the name of the organization of the recent thieves and prisoners – X-Con) and a sense of some kind of relaxation which will not leave you until the very end and which will help you in a great way to take a break in the hot summer weather (although this year it seems to be more rainy than usual, but you got the idea). 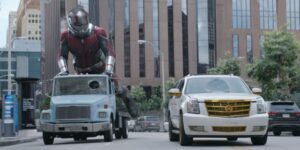 The pure existence of such shots should be enough for you to figure out that Scott Lang has clearly messed up again.

I already mentioned Reed and his crew so it’s probably time to give them the proper credit as well. “Ant-Man and the Wasp” is pretty well shot, can boast of a great cinematography and more than a satisfiable amount of effects. I started getting along with the fact that all hyped movies are being post-converted in 3D with the obvious goal of making further profits so I try not to get thrown by it anymore but here it doesn’t really bother the eye and fits well with everything else, especially when talking about some scenes in the movie where there’s so much hapenning and you literally don’t know on which of the details to focus. The other thing I found to be a pretty cool addition was the fact that most of the events take place along the awesome streets and sightseeings of San Francisco (which I had the opportunity to visit last year and is without a doubt my favourite city in the USA) where the architecture is such that it matches perfectly the mess that’s going on screen, in particular when certain parts of the landscape start getting smaller or bigger in order to save the heroes somehow. In addition to that we have enough presence of one of my favourite elements – the slow motion, as well as the stunning suit of the Wasp (Ant-Man’s suit hasn’t had that many changes since his last appearance on screen). We also get the return of Christoph Beck as a composer and he again manages to provide us with an amazing soundtrack accompanying in a great way all the things we otherwise receive from this movie.

Where did we end up…?

After two movies of great quality, which Reed and his crew have given to us in the last 3 years, Ant-Man for me personally proved his spot as one of the heroes with biggest opportunities for even further development and the idea of him being a literally solo comic relief in the everlasting superheroic series is more than welcome. And as Evangeline Lilly has mentioned in one of her interviews, the quantum realm, around which the plot of the movie takes place, has tons of potential and not only a possible sequel to the story arc of Ant-Man but also maybe a crossover with another story within the Marvel universe would be more than intriguing for the viewers.

The idea of the creators of the movie to move the world premiere to be after the end of the football World Cup might actually turn out to have been pretty good not only from a financial point of view but also for the viewers just because after all the football hype and emotions I did feel the need for something light and refreshing and I managed to find it in this movie. “Ant-Man and the Wasp” is not an Oscar-deserving movie or a production that will blow you away with something very specific but it handles and connects all of its components amazingly well, turning itself into a great summer movie suggestion and furthermore being able to successfully get us out of the rainy (literally and metaphorically speaking) situation which surrounds us everywhere at the moment. 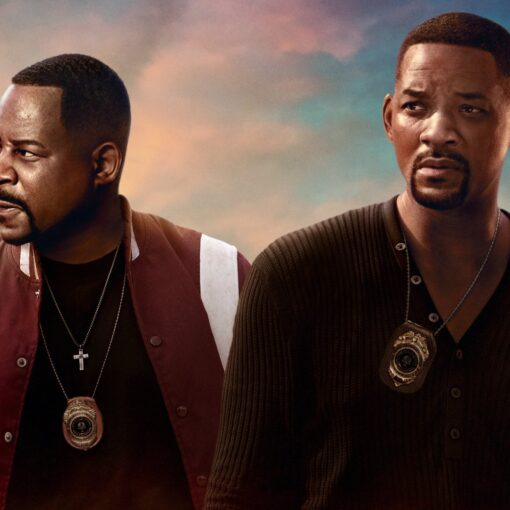 A small offtopic … again Here we are again, with yet another time when I haven’t written any new nonsense for a […] 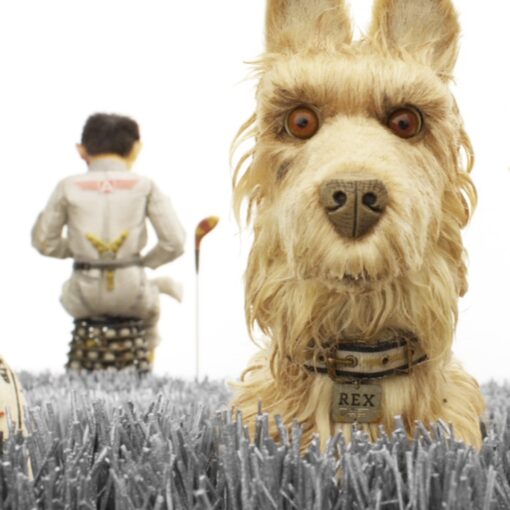 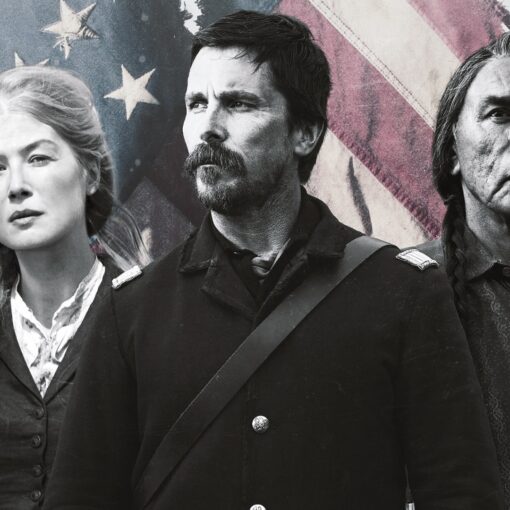 I’ve never imagined that if I ever started writing for myself again and for pleasure as a whole, I’d start with something […] 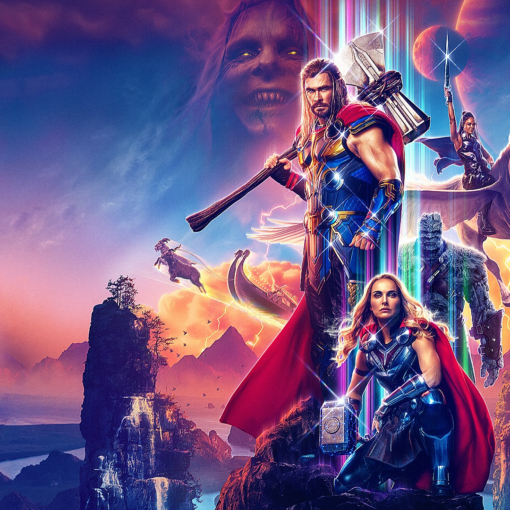